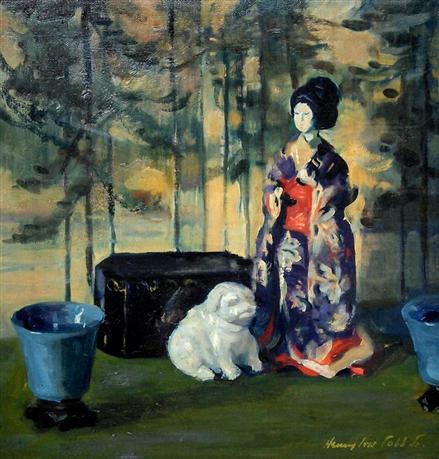 This is a rather rare still life by architect, political cartoonist, stage set designer and painter Henry Ives Cobb Jr.  Cobb's father was a very prominent 19th century Chicago architect known for his Romanesque and Victorian Gothic style buildings.  His great-grandmother Augusta Adams Cobb notoriously abandoned her husband and seven of her nine children to run off with Brigham Young as one of his many pluralist wives.

Cobb attended Harvard University, served on the Harvard Lampoon and was a member of the Hasty Pudding Club with fellow classmate Franklin Roosevelt.  He then studied architecture at the Ecole des Beaux-Arts in Paris.

He started as an architect in the New York branch of the family firm, got married and had two children but in 1914 he quit his job and got divorced and headed back to Europe to study painting at the Royal Academy of Munich.  He then began a brief but rather successful career as a Broadway set designer but having inherited his great-grandmother's restlessness he enrolled in the Officers Training program in Plattsburgh, NY and went off to the war in Europe.  At war's end he came home firmly set on a career as a painter.

Cobb studied with Robert Henri and began exhibiting, notably with the Society of Independent Artists.  He became known primarily for his scenes of New York city neighborhoods.  He was given shows at prominent art galleries in New York from the 1930's through the 1970's.

Muscarelle Museum of Art, The College of William and Mary , Williamsburg, Va