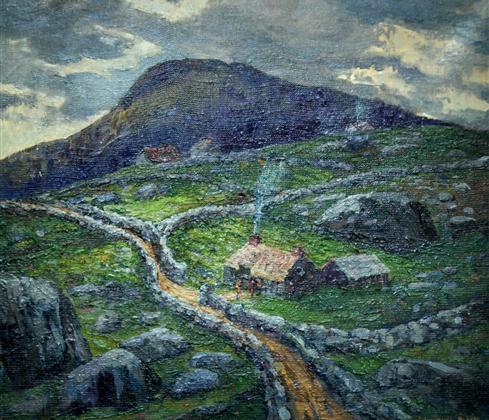 Susan Schell was born in Titusville, Pa. in 1891.  She studied at the Pennsylvania Museum School for Industrial Arts where she later taught for nearly thirty years.  Today the school is called the University of the Arts and the museum is the Philadelphia Museum of Art.

Schell was a member of the important group of women artists known as The Phiadelphia Ten, or sometimes The Ten.   She first exhibited with the group in 1934 and was an immediate success.  Noted art critic and editor Dorothy Grafly said that the artist "...fastens upon the dramatic landscape material with tragi-epic as opposed to rustic potentialities."  She went on to contrast Schell's "dramatic atmosphere" with Fern Coppedge's "color pattern." The critic for the Philadelphia Record also compared Schell to Coppedge.  Patricia Tanis Sydney, curator for the travelling exhibition The Philadelphia Ten: A Women's Artist Group 1917-1945, characterizes Schell's work as "powerful, personal, majestic, striking and theatrical." Schell herself noted that her goal was "to record moods of nature rather than give photographic representations to scenery."

This work was included in the above noted exhibition and is represented by a full page plate in the book The Philadelphia Ten:  A Women's Artist Group 1917-1945 published by the Galleries at Moore College of Art and Design on the occasion of the exhibition.

Today Schell's work is represented in the Woodmere Art Museum in Philadelphia as well as many other public collections and commercial art galleries.