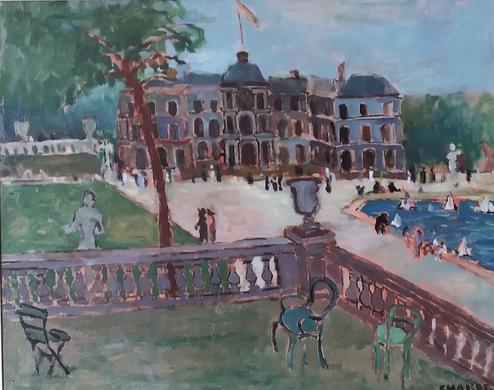 Moura Chabor was from a Russian Jewish background. She lived in Paris, and studied under Ossip Lubitch, in the 1930's. In the second World War she stayed at a cloister.
In the 1950s she was in New York and was one of the artists invited by Saks 5th Avenue to create part of the display in their windows. Moura was quite well known during that time, and did work for Ethel Kennedy's children. Moura and her domestic partner, puppeteer Roy Dexter, lived in a rent-controlled apartment just opposite the Metropolitan Museum, between 5th and Madison for a long time. The apartment was at the front of the building, one room on the 3rd or 4th floor, with huge slightly rounded windows. Moura made all of Roy's puppets, and each one of them had a real character. He was a ventriloquist and talked with the puppets as if they were people.

This wonderful view of Luxembourg Gardens in Paris was painted during her early life there, and reflects the influence of her teacher and other School of Paris painters.