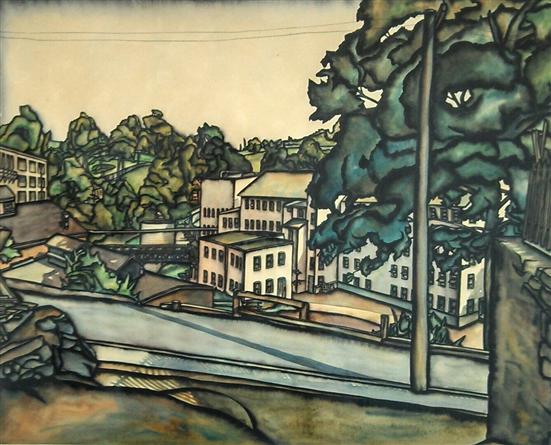 Marguerite Gaudin was described by friends as an "attractive, strong willed, independent and tremendously talented woman."  The distinctive style of this watercolor representation of the old Rockbourne Mills in Clifton Heights, Pennsylvania with the striking black outlines is easily understood when taking into account that she was an accomplished stained-glass designer.

Gaudin graduated from the  Philadelphia College of Art and joined the Willet Stained Glass Studios in Philadelphia where she worked for sixty years designing stained glass windows for over 1000 churches in every state and in several foreign countries and she designed one of the largest facet glass installations ever made, the 30,000 square feet of walls for the Hall of Science at the 1964-65 New York Worlds Fair.  She had solo exhibitions of her watercolors at the Woodmere Gallery, The Philadelphia College of Art and the Philadelphia Art Alliance.

She was a very intense worker, pulling all-nighters frequently to get a job done.  She never married and lived with her mother until her death in 1972,  after which she lived alone with her beloved cats.  One of her favorite pastimes was slot machine gambling and when casinos opened in Atlantic City in 1978 she made frequent forays.

The Rockbourne Mills were built in the early 19th century and were acquired by Thomas Kent in 1843.  The old mill building was demolished and replaced by the current structure in 1867.  The Kent Wool Mills supplied uniform cloth for every conflict from the Mexican War through the Korean war.

​      This watercolor was exhibited at The Art Institute of Chicago in 1935.