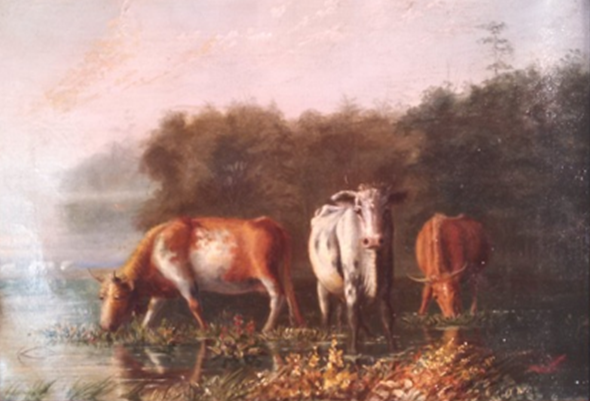 In 1852 at the age of ten William Lees Judson emigrated with his family from his native Manchester, England.  He served in the Civil War with the U.S. Army afterwards moving to Ontario where he spent some years farming.  In 1872 he began to study art in NYC under John B. Irving and later in Paris at the Academie Julian under Lefebvre and Boulanger.  Upon returning from Europe he worked in New York and Canada and later Chicago.  Finally in 1893 he moved to southern California where he taught at the Los Angeles School of Art and Design.  He served as an art professor at USC from 1896.  In 1901 he founded the USC School of Art where he remained dean until his death in 1928.  The mitered stretchers and the style of the frame are an indication that this work was produced in the early 20th century while Judson was working in California.