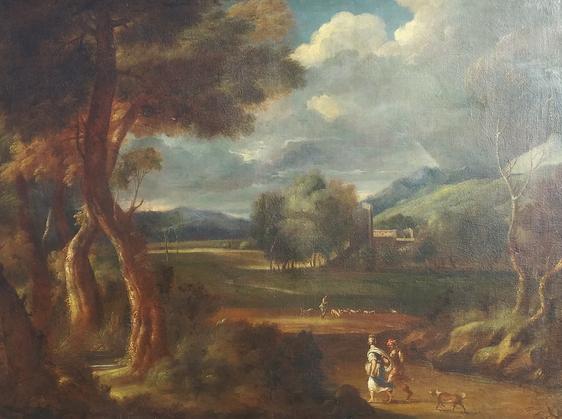 Travelers in a Stormy Landscape

This marvelous painting was purchased from the estate of a former curator at the Smithsonian Institute. In the late 1990s it was attributed to Gaspard Dughet by an expert at Christies in New York. Attributions are not a guarantee of authenticity, but a cursory examination of Dughet's work even by a novice will show how well this piece compares.

Dughet was born in Rome, the son of a French pastry-cook and his Italian wife. He has always generally been considered as a French painter, although in fact he never visited France. Between around 1631 and 1635 he became a pupil of Nicolas Poussin, who had married his sister Anne five years earlier. Because of this connection he was widely known as "Gaspard Poussin." After leaving Poussin's studio his works developed a more fluid style and developed his pictures of storms which account for 30 out of his 400 known works.

He specialized in painting landscapes of the Roman Campagna becoming, along with his exact contemporary Salvator Rosa, one of the two leading landscape painters of his time. He painted several cycles of frescoes, including one, showing various sites around Rome, at the Colonna Palace. He worked with Pier Francesco Mola, Cozza, and Mattia Preti at the Palazzo Pamphilj in Valmontone. He often collaborated with Guillaume Courtois who painted the staffage in his landscapes. This was the case, for instance, in the works for the Palazzo Pamphilj. There is another fresco cycle by Dughet, though in a bad state of preservation, in San Martino ai Monti.  From Wikipedia