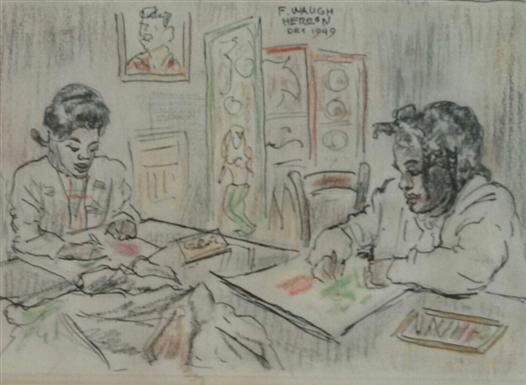 Frank Herron was born in Scotland in 1891 and served with distinction during the First World War receiving a medal for his service.  Upon his release from the military he immigrated to the United States arriving at Ellis Island on October 1, 1919 aboard the Royal George from Southhampton.  He settled in Philadelphia and quickly found work as a free lance magazine illustrator for the Ladies Home Journal among other publications.

I found this drawing particularly compelling because of the date it was created.  I feel most nostalgic for anything from the 1950's and this was created right on the eve of my favorite decade.  Since Herron had been a professional for some time I think it likely that this drawing depicts a class the he was teaching.  The label on the back has a price indicating that it was being exhibited for sale.  The inclusion of the word "adult"  may indicate a division of the exhibition or possibly that he was the teacher of the adults' drawing class at a school for students of different ages.