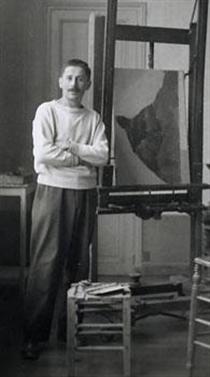 Gene Witten was raised in New York City and studied at the Art Students League.  In his twenties he moved to Paris and studied at the Acadamie de la Grand Chaumiere.  He returned to New York and divided his time between painting and a framing business he started with Robert Kulicke.  Witten became very adept at wood carving and gilding.  His partner Bob Kulicke was an innovator who developed moulding techniques using polymers which were forerunners of many used today. During this time Witten was exhibiting frequently, notably at the National Academy of Design.

Witten married artist Anita Reis and, after spending a year in France, the couple decided to eschew the bustle of New York and moved to New England.  In 1962 they settled in the tiny village of Shushan in upstate New York. It was around this time that our landscape was painted, and we acquired it from a collection in that area.  After 1980 Witten's work became increasingly abstract and in pastel colors resembling watercolor contrasting with the rich deep palette of this earlier work.