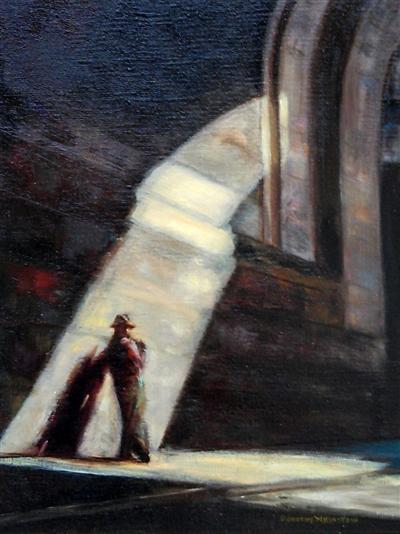 Dorothy Weinstein was born in the industrial city of Kremenchug in the Ukraine.  She is known to have immigrated to the United States in the early part of the twentieth century. She graduated from Pratt Institute in Brooklyn, New York and settled in South Bend, Indiana.  In 1986 she moved to Sarasota, Florida.  She was an active member of Hadassah, Jewish Women International, and The League of Women Voters.

I get a sense of the exterior of a large edifice like Grand Central Station or the old Pan Am building in New York City when I look at this painting. The canvas is supported by Anco Bilt stretchers which is the brand name that O. F. Anderson Company changed to in 1934.  The clothing of the man also brings to my mind the look of the depression era.  This may have been painted when Weinstein was studying at Pratt or shortly thereafter which would probably place it somewhere in the 1930's to 1940's although the lack of darkening to the canvas back and stretcher wood is indicative of ten to twenty years later.  Whenever it was painted it certainly imbues the viewer with a haunting sense of lonliness and isolation.