Based on the story by Paul Gallico

In 1940, The Saturday Evening Post carried a short story by Paul Gallico (1897-1976), who had begun his career as a sports reporter but who, in 1936, had moved to England and started writing fiction. In 1941, the story was published by Alfred A. Knopf as a slim novella of some fifty pages and was Gallico's first major success as a fiction writer, being reprinted several dozen times in succeeding years. It was also Gallico's only critical success, although he went on to write the hugely popular "Mrs. 'Arris" series, as well as The Poseidon Adventure. The Snow Goose was, in Gallico's words, "a once in a lifetime happening for a writer."

The story of The Snow Goose is a variation on the ageless myth of a man whose physical deformity prevents most people from seeing his underlying admirable character. It begins in 1930, and is set on the east coast of England. Philip Rhayader, an artist in his late twenties, is a hunchback with a crippled left arm. Rebuffed by society, he retreats to the desolate marshland by the sea, where he lives in an abandoned lighthouse. There he paints the marsh and the wildfowl that inhabit it, and provides a sanctuary for birds over the winter before they migrate north in the spring.

One day, three years after Rhayader had come to the lighthouse, a young girl named Frith, no more than twelve, comes to seek him out. Carrying an injured bird in her arms, she approaches the lighthouse timidly, for she is frightened of its strange inhabitant, but she has heard of his reputation for taking care of the marsh's wildlife. Rhayader tends to the bird, and tells Frith it is a Canadian snow goose, blown off course by a violent storm. Frith visits the lighthouse often to see the bird, but after it flies north in the spring, her visits stop. And Rhayader's loneliness returns.

Nonetheless, though the bird is the catalyst that brings Rhayader and Frith together, their relationship develops beyond it: they sail in Rhayader's boat, and he teaches her the lore of the marsh. Over time, the snow goose's stays at the lighthouse become longer and longer. By the spring of 1940, it becomes clear that the bird will leave no more. What of Frith, now a young woman?

The spring of 1940: Britain is enlisting small, private craft in a desperate attempt to evacuate hundreds of thousands of Allied soldiers from the beaches of Dunkirk, where they have been trapped by the German invasion of Belgium and France. Rhayader is determined to add his small boat to the attempt: "For once-for once I can be a man and play my part." He sails across the North Sea and successfully rescues many soldiers, ferrying them to boats in deeper water, while Frith watches over the birds at the lighthouse and awaits his return.

Beautifully written in simple, lyrical prose, The Snow Goose is a moving story about love and courage, with an ending that is unforgettable.                From a review by Arnold Baise 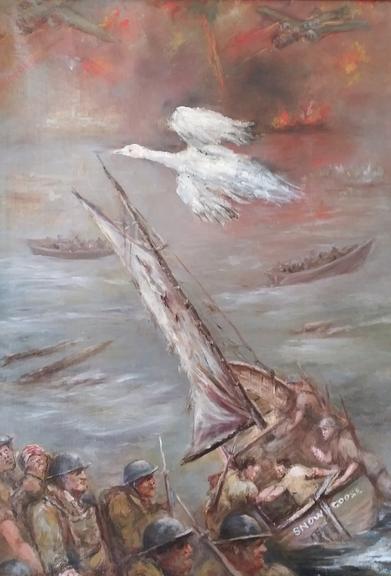